One from the JSH writing blog: 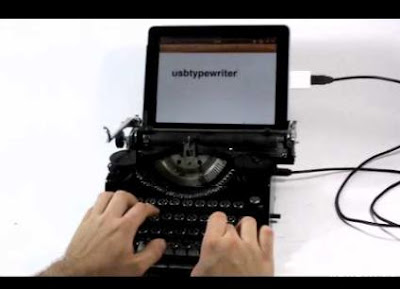 It's almost like this gizmo was created with me in mind: an antique typewriter transformed into a fully functioning keyboard, compatible with PC, Mac, and iPad. The $700 price tag gives me pause, but I have to admit it is a thing of beauty and I do deserve nice things, don't I?

Jack Zylkin, the brain behind this bionic typewriter, says on his website:

The USBTypewriter™ is a new and groundbreaking innovation in the field of obsolescence. Lovers of the look, feel, and quality of old fashioned manual typewriters can now use them as keyboards for any USB-capable computer, such as a PC, Mac, or even iPad! The modification is easy to install, it involves no messy wiring, and does not change the outward appearance of the typewriter (except for the usb adapter itself, which is mounted in the rear of the machine). So the end result is a retro-style USB keyboard that not only looks great, but feels great to use.

I have to wonder, though - does it really have the feel of old-school typing? Using a typewriter is a lot like a piano - you can touch the keys softly or you can pound them, reveling in the staccato slamming of the typebars against the paper, sometimes so hard that the interior of the letter "o" gets cut out and your finished product is perforated with little holes. There's a real Zen to the highs and lows of key-slamming intensity of manual typewriter usage, and those of us raised on them know it does make a difference in one's writing. Much was gained in the move to word processors and laptops, to be sure - but something was also distinctly lost.

I have a feeling that, lovely a device though the USB Typewriter is, it cannot withstand the abuse that an old Remington jockey such as myself would surely inflict upon it. If a typewriter is indeed like a piano, then I am its Cecil Taylor.

I suppose I'm just going to hold out till someone invents a true Clark-Nova, William S. Burroughs' sentient typewriter that dispenses two different types of intoxicating fluids when it likes what you've written.
Posted by Transylvania Gentlemen at 7:40 AM