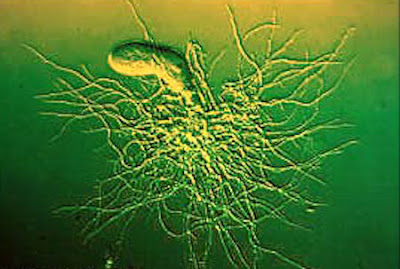 Once upon a time - not that long ago, really - science strictly thought of genetics in terms of an organism receiving genetic material from its parents or other ancestors. You passed your genes down to your offspring, and that was that.

Hold onto your seats. Nowadays, that's known as "Vertical Gene Transfer" and a previously undreamt-of Horizontal variety has changed everything. With Horizontal Gene Transfer, two entities can exchange genetic material without being related.

Horizontal Gene Transfer was first postulated in Japan in 1959, when it was demonstrated that antibiotic resistance seems to magically transfer itself between different species of bacteria; this had previously been thought impossible. The unoiled gears of empirical science grind slow, and very few people really sorted out for themselves the implications of that study until 1985. That's when M. Syvanen published his paper "Cross-species gene transfer: Implications for a new theory of evolution".

Syvanen's groundbreaking hypothesis was that genes could potentially be transferred laterally in all species (possibly even humans), without reproduction. "The cross-species gene transfer model could help explain many observations which have puzzled evolutionists," he said, "such as rapid bursts in evolution and the widespread occurrence of parallelism in the fossil record." Today, we now know that Horizontal Gene Transfer takes place frequently with bacteria, but proof that it happens with humans isn't concrete - yet. 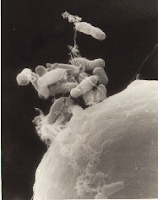 The frightening implications of Horizontal Gene Transfer are numerous. For one, it means that transgenic DNA could jump from one genetically engineered species to a natural one, wreaking untold havoc in nature. And many opponents of GMOs say that's already happening.

Agrobacterium causes large galls (tumors) on plants by injecting its own DNA into them. According to Wikipedia:

"Although generally seen as an infection in plants, Agrobacterium can be responsible for opportunistic infections in humans with weakened immune systems, but has not been shown to be a primary pathogen in otherwise healthy individuals. One of the earliest associations of human disease caused by Agrobacterium radiobacter was reported by Dr. J. R. Cain in Scotland (1988). A later study suggested that Agrobacterium attaches to and genetically transforms several types of human cells by integrating its T-DNA into the human cell genome."

Scarier still, Agrobacterium has been theorized as a possible culprit behind the mysterious Morgellons Disease, which continues to baffle doctors - to the extant that many still don't believe the condition even exists. A 2007 study by Raphael Stricker and Vitaly Citovsky claimed to have found Agrobacterium in skin samples from all the Morgellons patients examined in the study; however, an attempt by Dr. Randy Wymore in 2010 to duplicate their work failed to find any Agrobacterium.

The cleanup crews of the BP Deepwater Horizon Disaster in the Gulf of Mexico have been using a toxic mix of methods: at the same time as the controversial Corexit dispersant has been applied, experimental genetically-engineered bacteria that thrive on oil have also been put into the environment. According to Florida Gulf Skywatch:

" These microbes were designed to literally consume the oil and hydrocarbons leaking into the gulf. However, some of these microbes (even before they are genetically engineered) can cause skin rashes and immune responses in humans.

All of these bacteria can transfer genes to other bacteria through a process called, "Horizontal Gene Transfer." What is potentially terrifying is that we do not know exactly what genes were added to these bacteria and could have been transferred to bacteria native to the Gulf of Mexico. We could have countless new strains of bacteria growing and multiplying in the gulf as we speak!" 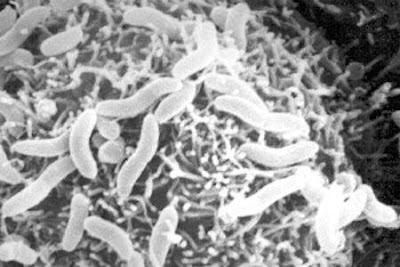 According to World Vision Portal, that is exactly what has happened, and doctors are finding the resultant "blue plague" harder to dismiss than Morgellons.
Posted by Transylvania Gentlemen at 12:29 AM