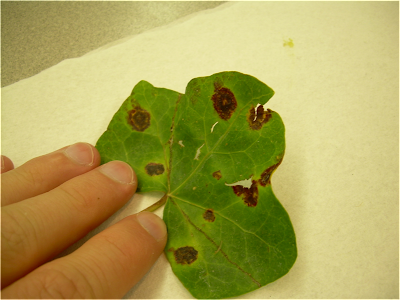 If you look at the ingredients on everything you eat (and if you don't, maybe you should), you'll see Xanthan Gum listed for all kinds of products, even including non-food ones. Since you're eating so much of the stuff, don't you think you owe it to your innards to find out just what it is?

No? Tough. I looked it up for you anyway.

Xanthomonas campestris is a bacterial species that causes many different kinds of plant diseases - from citrus canker to leaf rot, as seen in the photo shown above. In the 1950s Allene Jeanes discovered that a combination of Xanthomonas campestris fermented in a corn sugar culture produced a colorless slimy substance. It's also been done with wheat, whey, soy, and other plants; even dairy products can be a useful medium for the bacteria.

Xanthan Gum, as it was ultimately called, turned out to be a useful stabilizer and thickener. And best of all, it's ridiculously cheap to produce - it's just biofermentation of a plant-rotting bacteria. For that reason, its use has skyrocketed in recent times, and is imported heavily by Chinese manufacturers. 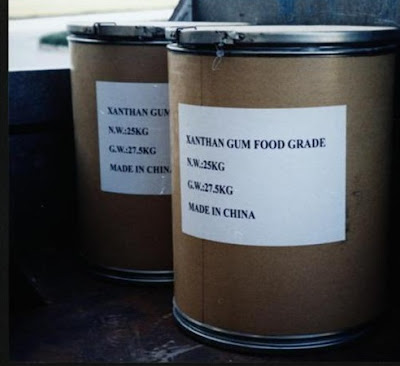 With the gum's propensity to increasing the viscosity of any substance at a remarkable degree by adding only a timy amount - and given its ability to sort of take on that substance's taste, color and characteristics, one has to wonder just how much of the stuff they're putting in consumer products as filler. Xanthan gum allergies are on the rise, which leads me to suspect that we're eating a lot more of it now than we used to. Anyone who compares fresh homemade ice cream (ingredients: cream, sugar) to store-bought ice cream (lots of ingredients including Xanthan Gum, Guar Gum, Cellulose Gum, Locust Bean Gum and Carrageenan) can see the obvious difference between the two, and after eating the former, one might ask whether the latter is actually more gum than anything else.

Also, it's been demonstrated that people with wheat allergies will also react to Xantham Gum that used wheat as its fermentation base. Other adverse reactions and side effects include dry skin, respiratory problems, and bowel problems. Sufferers of Celiac Disease have been warned by many doctors and nutritionists to avoid Xanthan Gum.
Posted by Transylvania Gentlemen at 12:54 AM