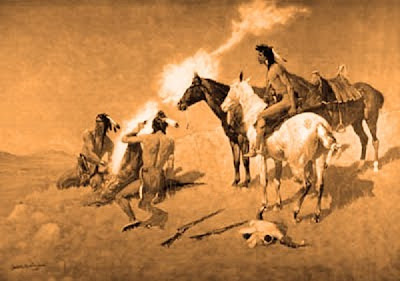 Before there was telephone and the internet, there was smoke. And where there's smoke, there's fire.

Cro-magnon man, or something like him, realized that building a fire is fine and all, but in so doing you are broadcasting your location from a great distance via the smoke. And so the earliest forms of smoke-signal commnication came between cavemen who simply used the smoke like a flare, to say "hey, I'm over here" in order for separated groups on a hunt to keep tabs on one another's location.

As man's mind became more complex over time, so did his smoke signals. Simultaneously in the Arab world, in China, and in ancient America, tribal peoples began to employ variations of smoke and imbue them with meaning. Using forked sticks piled high with damp grass (which smolders far better than dry), one could place them on the fire and off again, creating a sort of morse-code staccato pattern to be interpreted.

Around 150 BC, the Greek scholar Polybius devised an elegant alphabetical code for use with smoke signaling.

The Polybius Square as seen here is a 5x5 grid in which each letter is represented by its coordinates - therefore, the word "help" would be rendered numerically as "23 15 31 35", and via smoke signal using two torches, one representing the first numeral and one representing the second. Some versions of the square get 26 letters into 25 squares by combining the I and J; others omit the K and use C in its place. Prisoners have used this as a "tapping code" for centuries to subtly communicate with one another, and still use it to this very day. The acronym-heavy "text talk" of cellphones and the internet actually began here, before any of us were born - in order to shorten tapping time and hasten the message, abbreviations began to appear such as "GN" for "goodnight" and "GBU" for "God Bless You".
Posted by Transylvania Gentlemen at 3:02 PM