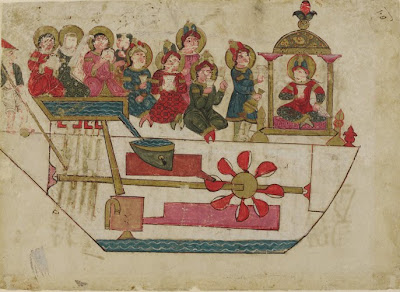 His book Kitáb fí ma'rifat al-hiyal al-handasiyya ("Book of Knowledge of Ingenious Mechanical Devices") was published in 1206, the year of his death. Known during his lifetime for his amazing inventions, he wrote this book at the end of his life to reveal his secrets of how he did it. The book is, in fact, written in the style of a "do-it-yourself" instruction manual. It contains plans of how to build his camshaft, crankshaft, water wheels, water clocks, and elaborate improvements on the candle clock. His most impressive clock was the "Castle Clock", however, about which Wikipedia says:

"al-Jazari's largest astronomical clock was the "castle clock", which is considered to be the first programmable analog computer. It was a complex device that was about 11 feet (3.4 m) high, and had multiple functions besides timekeeping. It included a display of the zodiac and the solar and lunar orbits, and an innovative feature of the device was a pointer in the shape of the crescent moon which travelled across the top of a gateway, moved by a hidden cart, and caused automatic doors to open, each revealing a mannequin, every hour. Another innovative feature was the variable ability to re-program the length of day and night everyday in order to account for the changing lengths of day and night throughout the year. Yet another innovative feature of the device was five robotic musicians who automatically play music when moved by levers operated by a hidden camshaft attached to a water wheel. Other components of the castle clock included a main reservoir with a float, a float chamber and flow regulator, plate and valve trough, two pulleys, crescent disc displaying the zodiac, and two falcon automata dropping balls into vases."

But it's his humanoid automatons that represent his true genius. One was a robotic waitress that would serve beverages to guests. By turning the machine on, a tank with a reservoir filled with tea would drip into a cup. Wnen the cup was full, it would trigger the waitress to move forwatd through an automatic door to serve the drink.

Another was a female humanoid standing by a basin filled with water. When the user pulls the lever, the water drains out of the basin and the automaton refills it. In creating this, al-Jazari invented the flush mechanism that is now standard in modern toilets today. 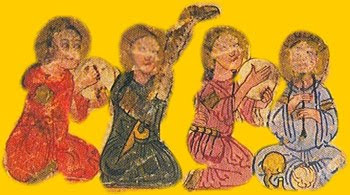 His grandest creation was a musical robot band, which may have been the first truly programmable automata in history. It consisted of a boat with four automatic musicians, which floated on a lake to entertain royal guests. According to Wikipedia, "It has a programmable drum machine with pegs (cams) that bump into little levers that operated the percussion. The drummer could be made to play different rhythms and different drum patterns if the pegs were moved around. According to Charles B. Fowler, the automata were a "robot band" which performed "more than fifty facial and body actions during each musical selection."

The Italian Renaissance inventor Leonardo da Vinci was almost certainly influenced by al-Jazari, as were countless subsequent experimenters in the field. 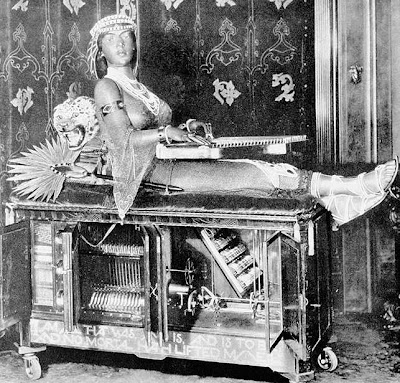 (And whether it actually works or not, we applaud the concept strictly for its own culture-jamming sake.)
Posted by Transylvania Gentlemen at 5:47 PM