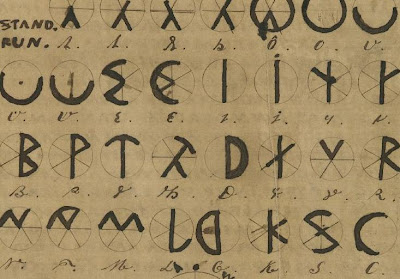 Generally regarded as a hoax, this peculiar manuscript came to light in the 19th century and was presented as being an ancient text of a forgotten matriarchal Freyja cult. The book is dated 1256, and some adherents of its authenticity claim it is a copy of even older manuscripts that are supposedly written by several authors between 2194 BC and 803 AD.

The book is believed to have influenced H.P. Blavatsky, and because of its mention of the continent/island of Atlantis, it has been cited in many articles by proponents of that land's existence.

Within the first few years after the appearance of the Oera Linda Book, there was great skepticism concerning its authenticity, not only for the exceptional claims being made, but also because of a number of anachronisms it contained. Research was performed on the quality of the paper, and it was claimed to have come from a papermill in Maastricht circa 1850. This skepticism has not prevented the book from being a source of inspiration for a number of occultists, speculative historians, and political parties during the century or more since its emergence.

The authenticity of the book is supported by at least some Neo-Nazi groups, possibly because it indicates a Northern European origin for several Middle Eastern civilisations — this despite the fact that the book itself heavily criticises the ancestors of the Germans as uncouth barbarians.

You can view scans of the original document here and read an attempt at an English translation here.
Posted by Transylvania Gentlemen at 1:48 PM