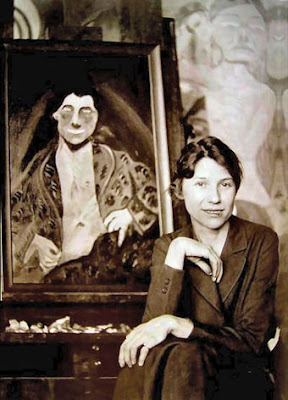 Raise your glasses to Leah Hirsig, born in Switzerland in 1883, moved to NYC at the age of two, became a high school teacher in the Bronx.

But Leah was no ordinary high school teacher. She and her sister Alma had a growing interest in the occult, one which grew so intense that they finally dared in 1918 to knock on the door of Aleister Crowley and pay him a visit. Crowley and Leah immediately felt a powerful attraction to one another, as evidenced by the description in Lawrence Sutin's book Do What Thou Wilt:

The "little sister" reminded me of Solomon's friend, for she had no breasts... She radiated an indefinable sweetness. Without wasting time on words, I began to kiss her. It was sheer instinct. She shared it and equaled my ardor. We continued with occasional interruptions, such as politeness required, to answer her sister in the rare intervals when she got out of breath."

Upon the sisters' second visit to Crowley's home, he again found himself unable to maintain conversation with Alma because of his lust for Leah: "While we talked, I took off her [Leah's] clothes and asked her to come and pose for me when she felt inclined." Although Crowley had never drawn or painted nudes before, Leah quickly became his greatest artistic muse of all. He went on to paint her portrait many times (albeit in his rather naive folk-art expressionist manner) including a special request she had for him to paint her as "a dead soul".

In 1920, she left with Crowley to institute Abbey of Thelema in a remote and abandoned part of the ancient mysterious city of Cefalù. During this time, she took on the name "Alostrael", performed some rituals with goats that are probably best not described here, and was promoted by Crowley to "Scarlet Woman" status.

"Scarlet Woman" was the name Crowley used for his female sex magick practitioners. The term derives from the book of Revelation, in which the 666 beast's consort is to be a scarlet woman. According to Wikipedia, "Aleister Crowley believed that many of his lovers and magical companions were playing a cosmic role, even to the point of fulfilling prophecy." Among these important women in his life were Rose Edith Crowley, Mary d'Este Sturges, Roddie Minor, Marie Rohling, Leila Waddell, Dorothy Olsen, Bertha Almira Prykryl, Jeanne Robert Foster, and of course, Leah.

Crowley's health began to seriously wane in 1924, and sensing Leah's increasing unhappiness with the drudgery of being his caretaker, he broke up their relationship. She remained fiercely loyal to him nevertheless, and continued to help out in his magickal pursuits in any way she could, even though Dorothy Olsen now replaced her as "Scarlet Woman". 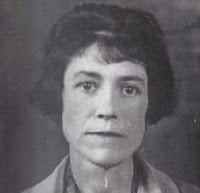 Of Leah and the Cefalù period, Crowley penned in his diary: “She loves me for my work… She knows and loves the God in me, not the man; and therefore she has conquered the great enemy that hides behind his clouds of poisonous gas: Illusion." Also during this time, he wrote the infamous obscene poem "Leah Sublime" about her.

Leah moved to Paris, France and lived as a prostitute on and off for some years. Ultimately she returned to America, settled back down to a more normal life with a new husband with whom she bore a son, and returned to teaching.

She died on February 22, 1975, but she lived to see the huge resurgence in interest in Crowley, Thelema, and the OTO. Leah Hirsig achieved a lasting fame and immortality for herself by her connection to Crowley, and to this day fan sites exist for this woman who explored the unknown with he who some called "the wickedest man in the world" - even though many of today's devotees weren't even born yet when she died.
Posted by Transylvania Gentlemen at 12:00 AM