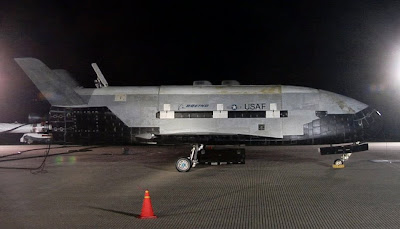 In yesterday's post, I wondered aloud about the Pentagon's mysterious lack of interest in the Space Shuttle after 1992. Clearly, they must have developed some sort of newer and better black-budget secret program of their own. But what?

One name that keeps coming up as a likely tip of the covert iceberg: the X-37B.

The Boeing X-37 was originally developed by NASA but then acquired (some would say "seized") by DARPA in 2004. It certainly does seem to make the Space Shuttle irrelevant - its first orbital mission, USA-212, was launched on April 22, 2010 with the help of an Atlas V rocket and it remained in space until just three months ago, returning to Earth in December 3, 2010. It is said that the X-37B is strictly for unmanned missions, but actually there is nothing preventing astronauts being on board.

The X-37B is powered by a massive array of solar cells, but it also has its own fuel tank that allows it to fly around in near-Earth space and change its orbit. On its maiden voyage, in fact, it did just that: amateur astronomers spotted it from their backyards and quickly computed its orbit in order to predict where it would be next, and when. But then the craft's orbit abruptly changed to an entirely different trajectory, momentarily confounding the terrestrial observers.

Now an entire fleet of DARPA's next-generation version, the X-37B, is on the way. One is fully operational and a second one is nearly completed. The next 270-day flight of the X-37B will launch on March 4 from Cape Canaveral.

As the mission of USA-212 and the X-37B program are classified, public commentary on the program is speculation. James Oberg speculated that the concurrent launch of Air Force's Hypersonic Technology Vehicle HTV-2 was related to the mission...

William Scott, coauthor of the techno-novel Counterspace: The Next Hours of World War III and former Rocky Mountain Bureau Chief for Aviation Week & Space Technology magazine believes that with X-37B, the Air Force might test weapon delivery from a space plane in low Earth orbit. This hypothesis aligns with speculation that the launch of USA-212 marks the beginning of military operations in space.

Posted by Transylvania Gentlemen at 12:34 PM