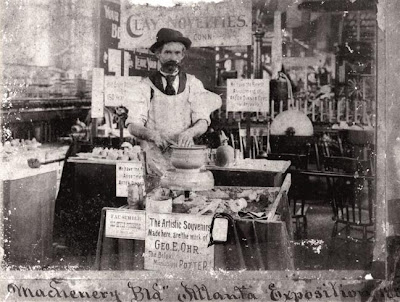 During the years when I was actively in the antiques biz, ceramics and art pottery was one of my specialties, and my holy grails were to obtain a piece of Teco and a piece of Ohr.

I did indeed succeed in the Teco department, finding a small green Teco urn (value at that time, in the mid-90s: $800) for only a couple bucks at Sammy's Flea Market on the edge of Richmond, KY. But I still have yet to actually lay my hands on a George Ohr product, and as time marches on I begin to think it's only as likely at this point as finding a Jackson Pollock at a yard sale (though some have claimed to have done exactly that.) 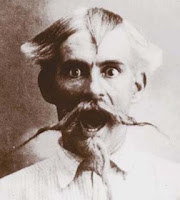 Why Ohr? Well, his pottery was fantastic, but mainly, I worship the man himself. With his trademark mustache, his wild and creative designs, and his flair for showmanship and eccentricity, George Ohr was truly the Salvador Dali of ceramics. He quickly earned the reputation as "The Mad Potter of Biloxi", and we most likely will not see his kind pass this way again. 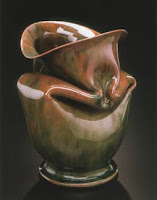 The Ohr-O'Keefe Museum of Art is celebrating George's 157th birthday, July 15, 2011. They're located at 386 Beach Blvd. in Biloxi and are open to the public, Monday thru Sunday, 9am-5pm.
Posted by Transylvania Gentlemen at 8:09 PM