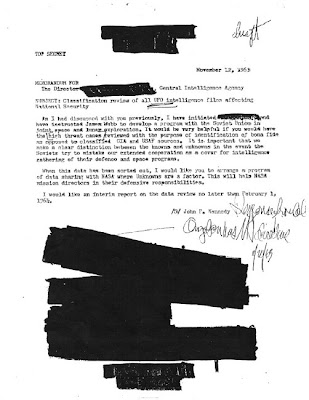 Not long after the announcement of a memo to J. Edgar Hoover about a crashed UFO, now comes information about two memos from President Kennedy - instructing the CIA to turn over all available UFO intelligence.

Kennedy never saw that data, however. He was assassinated just ten days later. 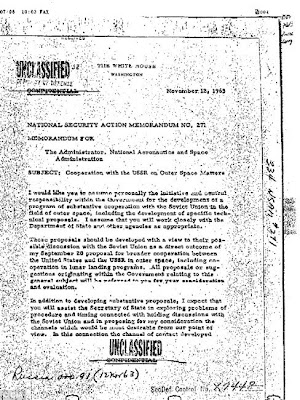 What does it all mean? The Daily Mail suggests that JFK was worried that the Soviets would mistake actual alien UFOs for U.S. spy craft. majesticdocuments.com suggests that the word "Unknowns" in JFK's memo is actually code for the aliens, and that the phrase "defensive responsibilities" refers to our need to defend ourselves from aliens, not the Russians. They also host scans of the "Burned Memo" which, although lacking the provenance of the other JFK UFO docs, does seem to add corroboration - in it, the CIA director notes that "Lancer" (code word for the President) "has made some inquiries regarding our activities, which we cannot allow."