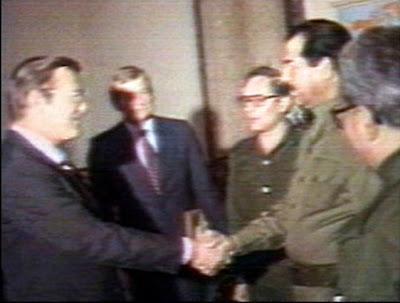 There once was a time I regarded Donald Rumsfeld as one of the most evil men on Earth.

After all, at a glance, it seems a no-brainer, right? He was a key player in the Nixon, Ford and Bush II administrations. In the Watergate tapes, Nixon praises "Rummy" for his ruthlessness. His complicity in the "weapons of mass destruction" lie, and in the Gitmo atrocities - including continued defense of them even after the human rights violations were made public - would surely drive any sane person to condemn him. Right? And the mission statement and member list of his Project for the New American Century read like a virtual instruction manual and Who's Who for fascism, right?

And yet... and yet. Rage against the machine though we rebels may, let us never lose sight of the fact that Rumsfeld and his ilk do indeed have access to classified information that we do not, and that we cannot truly know why these sort of people do the things they do without knowing what they know. Without apologizing for the atrocities committed under Rumsfeld's watch, at least let us entertain the remote possibility that he knows something that, if we knew it too, would change everything. But like imagining what the fourth dimension is like, we can't even begin to speculate on things that we don't even know that we don't know about.

One of the best indicators to me that old Rummy is less of an Illuminati-esque power-broker and more like a subservient victim trapped like a cog in the gears of a greater beast, is his statement made on public television on February 12, 2002, in which he actually attempted to educate the masses on that very mindset I just spoke of. One might even call it a cry for help via a very telling shibboleth. What he said was:

"There are known knowns; there are things we know we know.

This is one of the most algebraically elegant, illuminating, and jaw-droppingly truthful things I've ever heard come out of a politician's mouth, and here it is coming from a conservative Republican generally regarded as a shill for the military and mega-corporations.

Most people, however, couldn't even make sense out of Rumsfeld's statement, and immediately his comments became the butt of jokes around the water cooler and among the media talking heads, who said he was talking gobbledygook. That's about the beginning of when I really started feeling like I was living in John Carpenter's They Live and I'm the guy with the special sunglasses. Or at the very least, glad I don't consume the dumbing-down artificial sweeteners that keep people from seeing the Fnords.

Am I ready to join the Donald Rumsfeld fan club? No, far from it. I doubt he and I could ever see eye to eye on much of anything, though the more I learn about him, the less I thought I knew. And I have great difficulty convincing myself that any man is truly evil incarnate - they may do horrible and wicked things due to some sort of mental aberration, or because they were acting on bad information. Old Rummy was, it must be said, a fighter for civil rights in the 60s and 70s, which sets him squarely in a different league than the gray-faced old racists in the Nixon administration that he ended up servile to. The man was an Eagle Scout - which is an organization I hold in high esteem - and he was close personal friends with, of all people, Sammy Davis, Jr., hardly the kind of chum you'd expect from a man reputed to be slightly to the right of Attila the Hun.

Even more eye-opening, there is a possibility that Rummy was actually making a sort of reference to a similar statement made in the 14th century by the Islamic mystic poet Ibn Yamin Faryumadi:

One who knows and knows that he knows: This is a man of knowledge; get to know him!

One who knows, but doesn't know that he knows: This is a man who's unaware, so bring it to his attention.

One who doesn't know, but knows that he doesn't know: This is an illiterate man; teach him!

I also find it worth mentioning that Rummy's autobiography, Known and Unknown: A Memoir, depicts him standing in Taos, New Mexico with the Plaza Blanca mountains behind him. This general area is a paranormal/conspiracy nut's wet dream, what with the Taos Hum, the Taos Vortex, the nearby UFO crashes, the spooky volcanic Ice Caves, and the haunted Taos Inn.
Posted by Transylvania Gentlemen at 1:36 PM