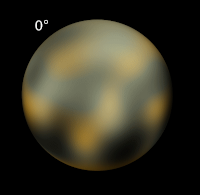 The planet Pluto has always been something of an anomaly. Scientists can't even stop bickering over whether it's even really a planet or not (take our word for it, it most certainly is.)

Many scientists insist that Pluto and its largest moon Charon, should be considered a binary system because the barycentre of their orbits does not lie within either body. Those confused bureaucrats at the IAU haven't been able to come up with an "official" definition for binary dwarf planets (Meanwhile, the rest of the solar system is doing just fine without the IAU's arbitrary proclamations).

Having been declassified from planet status, Pluto is now considered part of the Kuiper belt. But it's unusual among Kuiper Belt objects in that it has an atmosphere. In 1988 it was discovered that Pluto, presumed to be a tiny clod of rock and ice, possessed a very thin methane atmosphere that extended no more than 85 miles above the planet's surface. 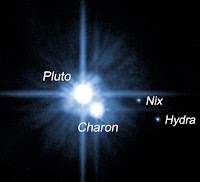 The existence of this atmosphere is, in itself, anomalous, but it gets weirder: researchers are now stunned to find it's growing by leaps and bounds. According to sott.net, the atmosphere has been steadily expanding and currently extends for about 1865 miles. Scientists had assumed Pluto's atmosphere would actually shrink as its orbit takes its further away from the sun's warmth, but the opposite is happening. No one's sure why.

Not only that, the chemical composition of it is spontaneously changing: carbon monoxide is now showing up there where it never had before. Again, no one's sure why.

Mainstream astrophysicists are continually "surprised" by new data sent back by space probes and orbiting telescopes. That ought to be a clue that something is wrong. New information always sends theoretical astrophysicists "back to the drawing board". In light of this, it is curious that they have such "cock-sure" attitudes about the infallibility of their present models. Those models seem to require major "patching up" every time a new space probe sends back data.

Posted by Transylvania Gentlemen at 9:43 AM